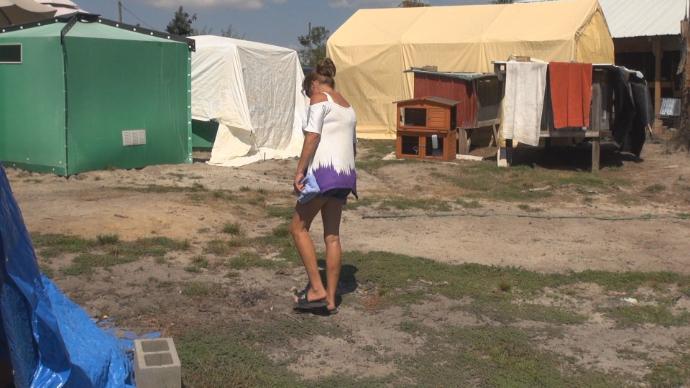 As the one year anniversary of Hurricane Michael nears, a Bay County woman who has hosted a tent city since the days following the storm is worried for its future.

Shelly Summers still has a dozen or so people living on her property. She says it’s a temporary option for people trying to get back on their feet following the storm.

Summers says she’s helped dozens of folks in the last year, but is now having to turn people away, and is worried she might have to ask them to leave her property entirely.

When she looks out at her backyard, she sees, as she puts it, "Family. I see safety, normalcy. I see people."

Summers' yard serves as a haven for hope for people who had lost it following Hurricane Michael.

She’s fighting for people like Robyn, who says she lost all of her identification during the storm and was kicked out of the tent she was living in after it.

That's when she was dropped off at Summers'.

And then there’s Teresa, who lived in her truck for more than a month after the hurricane because her kids couldn't take her in.

They are just two of the dozen or so people still living on Shelly’s property.

"Where are they going to go? They have lost everything. To me, they're family," Summers asks.

Johnathon Barefoot moved to Summers' right after the New Year because he was running out of people’s couches to crash on.

"I hopped around from place to place, that got exhausting," Johnathon says.

Everyone here gets a free place to sleep, shower and eat. But most importantly, "I feel absolutely 100 percent safe right here. Without a doubt. Like, I feel nothing can touch us," Johnathon says.

But Summers isn't so sure.

"Two weeks from now, this could not be here depending on what the county decides to do," she explains.

When WCTV visited at the end of September, Summers us told Bay County officials informed her of several violations.

But they didn’t expect such kindness from complete strangers like Summers and her husband. Especially since they feel like everyone else turned them away.

The county provided us with a letter it sent to Summers, dated June 6.

It states, in part, state and county regulations don't allow the placement of multiple, unpermitted dwelling structures on her property.

Summers says she then had an engineer respond, with plans for one structure that had rooms built off of a common area,

The county tells WCTV that's because Summers' property isn't zoned for that.

The county also provided us with emails it exchanged with the engineer Summers was working with.

Those emails state Summers' property is zoned only for single-family homes, manufactured homes and duplex dwellings.

Summers says the county's option is both cost prohibitive, and would force her to ask some of the people living on her property to leave.

"I think I'd like to challenge anyone who's coming out here to make them leave, before the do that, to make their family member leave," Summers says.

The county counters it's willing to work with Summers and is just following the law.

But, these folks don't know where they'd go, if the county decided to enforce it.

"I could be in the same situation I was in before I got here, which is very scary because I didn't have nowhere to go before I came here, and it's going to be hard to say that I have somewhere to go afterwards," said Johnathon.

He looks at Summers' backyard, and see's home.

When asked for comment, Bay County provided the following statement to WCTV:

Previous :
Migrants say they face danger before court in Texas tents
Next:
More city-sanctioned tent cities could be coming to Tacoma in wake of parks tent ban