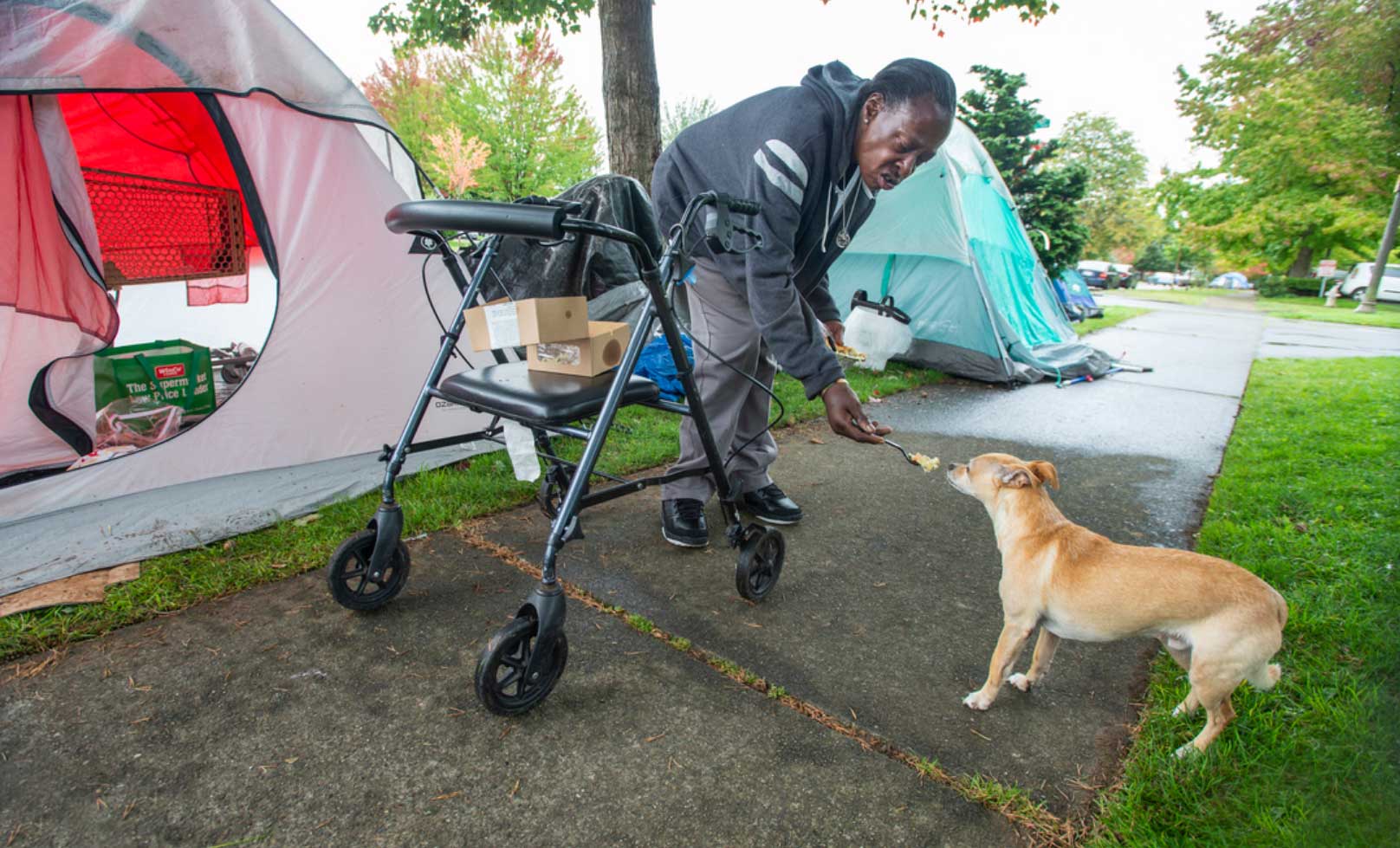 Blocks away, at People’s Park, rows of tents filled the planting strips. The situation — which recently moved from the park itself to the edge of the park — has had Blocker’s attention for most of the summer, he said, generating more than a few angry emails from constituents.

“I keep getting calls about the parks. Violence, drugs, people are afraid to take their kids there,” Blocker explained. “I could show you email after email of people just handing me my ass about People’s Park.”

That includes ideas that have previously been difficult to swallow at City Hall, he said, like scattered shelter sites throughout the city, or tent cities. The hope, Blocker said, is finally finding a suitable place for some of the most service-resistant members of Tacoma’s homeless population.

“When I got on the council, I said let’s do tent cities, and (Mayor Marilyn Strickland) and (City Manager T.C. Broadnax) said ‘No,’” Blocker told The News Tribune.

Why this? And why now?

Sitting on the curb near People’s Park, 40-year-old Tommy Wright provided part of the answer.

An hour earlier, Wright looked around and said simply, “I’ve been here my whole life.”

Wright was talking about Hilltop. He was born here, he explained, at a hospital down the street. He was raised here, in a home his grandfather owned.

And, for the last two years, Wright has been homeless here.

“I had my own place. I made good money. I was a server. I made good tips, and I had things the way I would have liked them to have been,” Wright said of the life he had before becoming homeless.

“I didn’t know what it was like to be homeless until I was out here.”

Wright’s situation is particularly tenuous because his days sleeping among the rows of tents that now line People’s Park are numbered, and he knows it.

Beginning Dec. 1, a new rule — in response to the kinds of issues experienced at People’s Park and other parks throughout the city — will ban tents and other walled structures during the day. Camping at night is already prohibited.

Around the same time, Tacoma Police spokesperson Loretta Cool said, camping on the city-owned parking strips along People’s Park — which is already illegal — will also begin to be addressed.

This, too, is part of the city’s latest response to its homelessness crisis.

According to officials from Metro Parks, the city and the police department, the new rule and enforcement measures will help address concerns at parks, with coordinated outreach efforts hopefully helping to move individuals experiencing homelessness into better, safer situations.

Passed by an 8-1 vote of the Tacoma City Council on Oct. 2, implementation of the code change was delayed 60 days after a public outcry about the impact of rushing to clear the parks of homeless encampments.

The goal of the delay is to allow Associated Ministries, the Metropolitan Development Council, the Tacoma Ministerial Alliance and other community partners to develop new shelter options between now and when implementation begins.

The park code change, according to Anita Gallagher, an assistant to the city manager, “does not make using a tent a criminal offense.”

Rather, Gallagher said, the goal is to “work to connect individuals with services that help them with their particular needs.”

Shon Sylvia, executive director of Metro Parks, believes it’s a worthy goal, and an achievable one.

“We are working with the city, other public agencies, and the faith-based community to identify other temporary spaces that allow tents in lieu of parks, as well as more permanent solutions to meet the needs of those experiencing homelessness,” Sylvia explained.

“Doing more of the same is not an option, or we will be having this same conversation next spring,” he added. “Our alternative spaces won’t be perfect, but we’re confident that the options will be in place by Dec. 1, with a scalable plan, because a lot of good people from different organizations are working on it.”

Officials with MDC and Associated Ministries, who have been tasked with pulling it together, believe all of this is possible — but it’s going to take time, they said.

By Dec. 1, some are uncertain what will have materialized, including Michael Yoder, the executive director of Associated Ministries.

“There’s so much energy toward doing something unique and different,” Yoder said, before tempering his enthusiasm with the reality of the quickly approaching deadline and the challenge it entails.

“I hope there are a few more things in place,” he added.

The new Metro Parks’ code represents the latest step in the delicate tightrope walk Tacoma has been attempting since 2017, when then Mayor Marilyn Strickland and her council colleagues declared homelessness in the city to be a public health emergency.

During that time, elected officials have sometimes referred to the “push and pull” their emergency response requires, especially with federal court rulings essentially making it unconstitutional to criminalize homelessness unless adequate options are provided.

For Tacoma’ that has meant trying to strike a balance between providing things like additional shelter space and services while also utilizing enforcement measures to help reduce the negative neighborhood and public health impacts of homelessness.

It hasn’t always worked as intended.

With a lack of permanent supportive housing to rely on, the city’s multi-million dollar Dome District shelter has typically operated at or near capacity, just like other shelter options in Tacoma.

Meanwhile, while each represents a success story, over the course of several years a relatively small number of individuals who have received services have actually become housed.

The dilemma is one reason why, way back in 2017, the city began attempting to work with faith-based organizations and nonprofits to host shelter sites.